A Bump in the Road

Hello, before I get to the title stuff,  I have a small finish to share with you.  A while back I think I showed you the really neat frame that I think was originally the side piece of a grandfather clock.  I stitched the Coverlet design by Cross-Eyed Cricket to fit in this frame.  I needed to make it a touch longer, so I copied two designs off of a coverlet throw that I have.  Now it fits perfectly in the frame and the spot that I stitched it for. 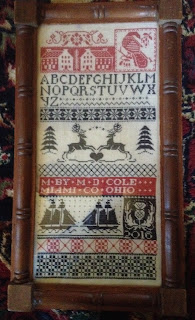 I think that my sampler designs did well at the Nashville market.  Now I am just waiting for a check to arrive!

Now to what has been happening here at Merry Wind Farm.  Two weeks ago, I had two calls from my Mothers life alert in the middle of the night.  The first time I managed to get her up, it helps that she only weighed a little over 100.  The second time she had fallen flat on her face and broken her nose!  So the squad came and off to the ER who admitted her to the hospital.  Several things just started building up...her awful hip pain (which was probably the reason for the fall), the diabetes, the weight loss, weakness and muscle loss, severe bladder infection....etc, etc.  She was in the hospital for four days and then was sent to a nursing home for rehabilitation.  She has now been there for over a week and so much progress has been made.   A lidocaine patch on her hip, curing up the bladder infection, physical therapy, insulin, even medicine to increase her appetite.  She should be coming home any day now.

Now, what I want to know, is why her family doctor, who I have taken her to many, many times, didn't try this patch or medicine for her appetite?  He knew she was getting thinner and weaker, and his only remedy was to prescribe hydrocodone and oxycodone.  Not only did they not even get rid of the pain, but doped her up, and she didn't want to take opiates...I don't blame her.  This hip thing has been going on since last fall, and he never managed to help the pain.  And, he never really addressed the weight loss other than to say that she had lost more weight.  Grrr....I am really angry at him as it seems that he did nothing.  If I didn't know better, I would say he thinks she is old enough:( If she had not fallen and ended up in the hospital, who knows what would have happened.

Regarding the unfortunate broken nose, yesterday she saw the ENT specialist, and he said that even though she broke it in two places, she can breathe and it is functional.  Surgery at her age (89) and with a pacemaker is quite risky and not necessary.  I am very relieved, but she is so upset.  This is the 3rd or 4th time she has broken her nose, and she has always hated it and was hoping to get a nose job :)

I mowed the grass yesterday!!  Hooray!!  Spring has arrived!