Good afternoon to you all!! I'm back using the old blogger which they say no longer works as of Sept. 1, so this may be the end of me!! Hahaha! I tried the new and could not even figure out the most basic of things, such as where to type. I do have a simple new release Two Blue Deer, Elizabeth Richey. She is my first and probably only PDF as I believe it is so important to support the needlework shops, but I just thought she was so simple and did not really warrant a printed chart. Available for $12 in my etsy shop.  A sweet marking sampler with beautiful colors. 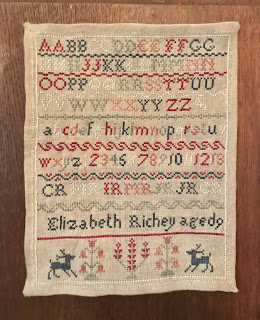 For many years, I have stitched mostly large reproduction samplers but have now run out of room.
Several recent finishes are languishing in a drawer, even including the magnificent
Ann Tong Uffindell.

So recently I have done some smaller things that I will share with you.  I must admit
that they are also languishing in a drawer.  But when framed, I should be able to find a spot.              Oh well..... 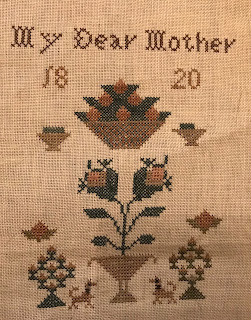 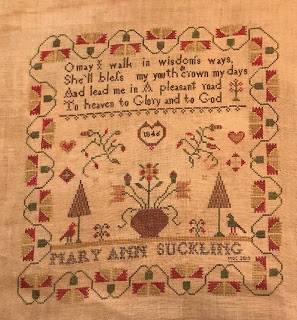 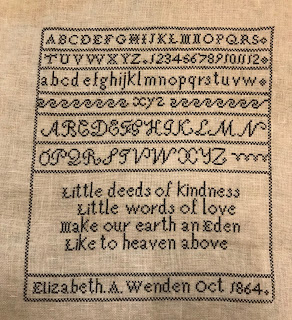 Also Gigi Ries, was a "January" sampler a couple
of years ago, I am a bit late. 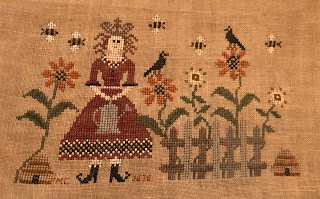 The Queen's Garden, based on a Scottish Sampler
Scarlett House 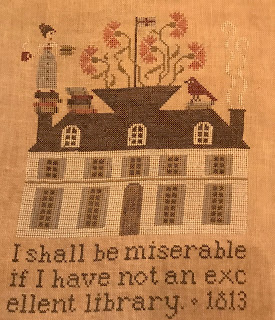 Miss Bingley's Library, based on Pride
and Prejudice.  I want to frame this and
hang it from one of my bookcases.

I will have a wonderful new release later this fall.  She is A Sister Remembered, Agnes Wardrop, and was reproduced as a special release to the Western Reserve Sampler Guild in June.  The story behind
her and the history is fascinating.  This is the only sampler I have ever seen that
was turned into a mourning sampler after the stitcher's death.

Here are a couple of sneak peaks.  The eyelet trees are wonderful!  A huge Scottish manor house!
I can't wait to present her to you!  The colors are earthy greens and browns, with lots of red and pink. 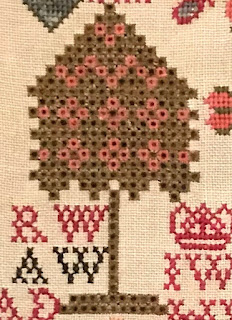 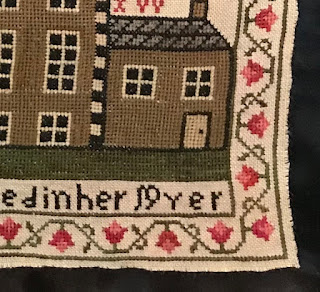 I have also just completed stitching Pomegranate Sampler by Plum Street.   The used chart is
available for free to someone who wants to stitch it.
Drop me a comment, and if there is more than one person interested,
I will draw a name this weekend. 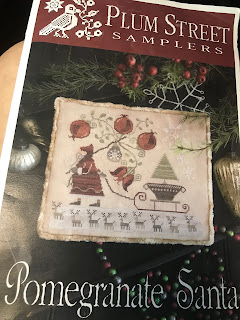 We are going to have another hot spell here in southwest Ohio.  Can't wait for autumn!
I am hopeful we will get some rain from one of the storms down south.  It is
always so dry this time of year.

Later,
Melinda
Posted by Merry Wind Farm at 10:30 AM