Too hot to do anything but stitch and blog!

Hello, today was a sweltering 103!  And, it was also the annual Dayton International Air Show, which is quite a big, nationally known show (we are, after all, the birthplace of aviation).  I don't know how those folks managed it, I could barely stand to walk to the mailbox.  I hate summer, I have decided.  Thankfully, there is supposed to be a break tomorrow.  And I just heard on the news that there are still tens of thousands without power in the east.

Enough complaining from me, and on to some pictures.  I finished this cute little Coverlet Birds design from Tanya of The Scarlett House.  I aged it a bit and made a cupboard tuck out of it.  I tweaked the mantle ...again...deciding there just wasn't enough interesting stuff to look at.  So here it is.  The rug is one I hooked from a Kris Miller of Spruce Ridge Studios pattern. 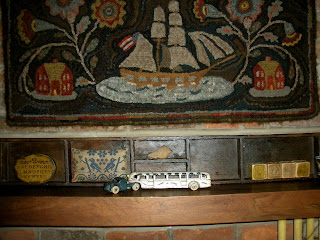 You'd think the horses would stay in their bank barn, which is a cool 84 degrees, with their fans blowing on them.  But no, here are two of them nibbling about on dead grass....  I didn't enhance the photo so that you can see how bad it really is. 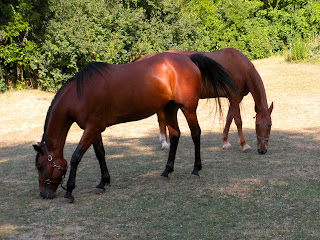 I am stitching along with Kelley from Kentucky on Hannah Lancaster.  She is a lot of fun to stitch...I am doing mine on 32 count lambswool.  Here is my progress. 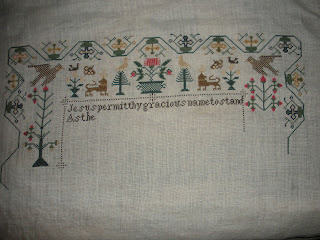 I'm also coming along on Margaret Leadbitter.  I'll stitch the temple last, as that looks like the most fun. 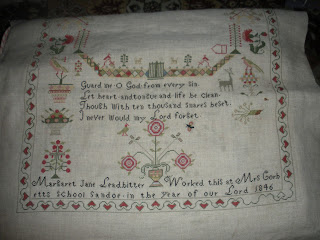 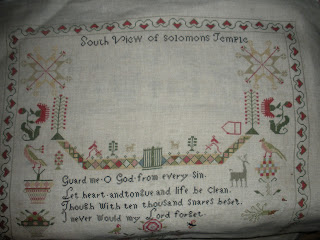 And, so he's not left out...the third horse, Pipsy.  The two mares are always together, and he is left out.
Anna, the chestnut mare in back in the previous picture, thinks she is quite the head mare and works diligently to keep Blossom safe from that nasty, scary gelding!!! 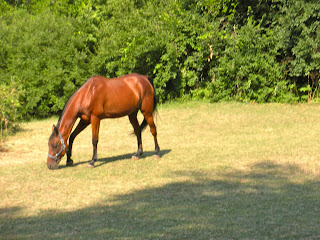