Hello and Happy Fourth of July!

It is too hot to do much of anything today.  You all know how much I hate summer.  We have had several days of cool weather this summer, and I try to get as much done outside  as possible.
I do think the heat and humidity has now set in...big frown...
That means I'm inside as much as possible until October!! 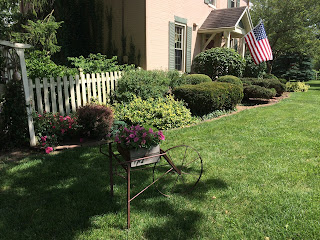 If I didn't have horses and gardens, I wouldn't step a foot outside the rest of the summer!

The first cutting of hay is in the barn, so I don't have to worry about that again
until August.... 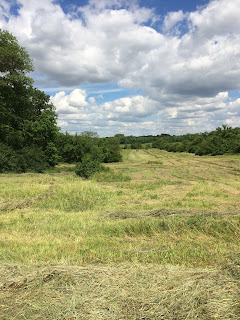 I have never stitched any patriotic samplers to show you, but did do this rug a few years back.
I believe this designer is named Sandra Smith, from California. 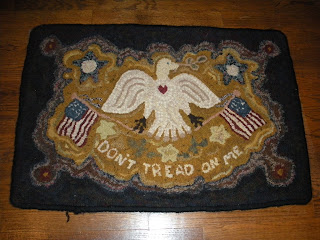 I think my Mother and Grandmother used to say that copying is the
sincerest form of flattery.
I was in an antique mall in Tipp City this week.  There is a booth with some primitives and rug hooking supplies.  I was surprised to see this rug pattern. 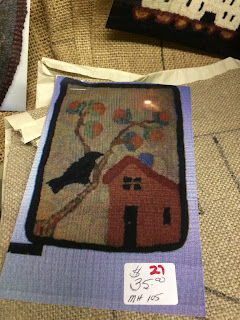 Around eight years ago I participated in a rug hooking workshop right here in Tipp City.
It was sponsored by three nationally known rug hookers, and was the first rug class I ever took.
We were given templates to arrange into anything that we wanted.
Here is my rug. 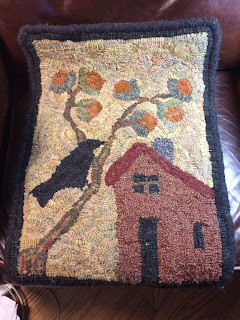 Hmmmm......
I wanted something really primitive and came up with the pomegranate tree with the big crow.
I can't call it my design, but it was my "arrangement".  I guess I should feel flattered that someone
liked it enough to copy it.

Then, also this week, this miniature doll house sampler appeared on eBay. 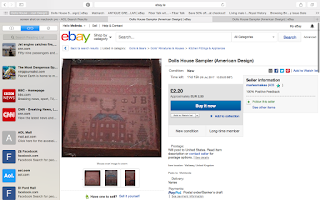 This one I  can actually say is mine!!  Mary Inglis from Merry Wind Farm. 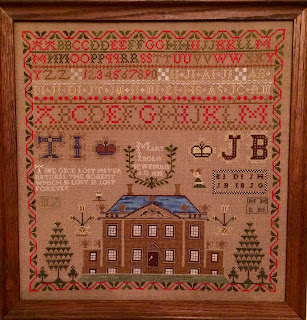 Several other big time reproduction designers  work was also on the site.  I guess I am honored to even be in their company, as I am small potatoes.  Does this mean I have arrived???
To be copied along with the big fish???

Hope everyone has a happy Fourth of July!  I will be sitting and comforting dogs scared of fireworks tonight.